Hi. We are three students from Beijing World Youth Academy. We created this tour guide to help foreign friends to not only enjoy a unique trip, but also learn about Beijing culture. This travel guide offers a systematic summary of experiences gained from our own investigation and on these spots. Hope you will enjoy the trip !
--Jenny Ding 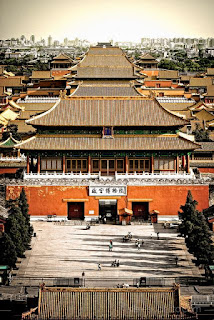 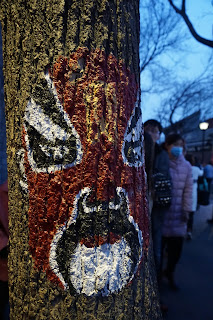 Hi, everyone, welcome to a capital city whose story goes back at least 3000 years. We hope you will enjoy the best Beijing experience and gain unique knowledge about Beijing culture by exploring old Beijing with us.

Here we selected three scenic spots inside the city, which demonstrated Chinese traditional culture as well as modern twist. These three attractions are Jingshan Park, Nanluoguxiang and Shichahai, which won the favorite of both foreign tourists and local Beijing's. We wish to provide the most effective help to foreign friends who like Beijing, to visit the hidden treasures, experience traditional culture and taste various delicious snacks in the combination of ancient and modern beautiful sceneries.

Jing Shan Park is located in XiCheng District of Beijing, along the central axis of Beijing. Built in 1928, it has almost 90 years from now. Jing Shan Park was once badly damaged and desolated, but now it was listed to be a key national cultural protection site and National AAAA Scenic Spot. 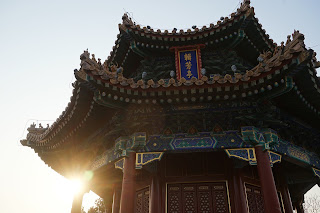 Figure 1. Wanchun pavilion on the top of the mountain.

Climb up to Wan Chun pavilion and you can enjoy fantastic views while standing on the top of the mountain and looking down at the city. Jingshan is a famous observatory in the city.


What can u see here?

You can see the full view of the Palace Museum from the top of the JingShan.You can also see Jiaolou, the corner gate of palace museum. If you look at the west, you can see the white tower in Beihai Park. 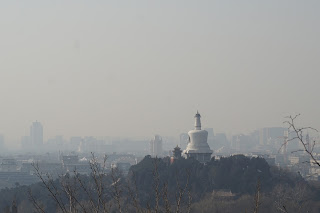 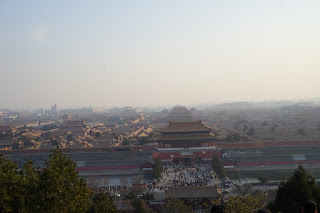 Get into the park from the front gate (west gate) and leave at the east gate, and that may be more convenient to move on to Nanluoguxiang.
Spend about 60 to 90min here.
Opening time: 6:30a.m. to 9 p.m.
Entrance fee: 2 RMB (adults) / 1 RMB (children and elders)

Next we are going to NanLuoGuXiang from JingShan park. You can refer the following route. 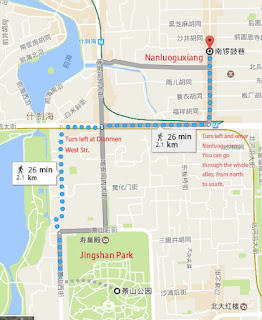 Nanluoguxiang is one of the most famous Hu tong in Beijing and it is now like a place of must when foreigners and outsiders visit Beijing. It’s becoming more and more modern and international as it was renovated during the October of 2016.The transportation is convenient indeed, you can choose various ways to come to Nanluoguxiang, taking buses, subway or riding bikes.

Nanluoguxiang is situated on the east of the central axis. It was built almost the same time as the Yuan dynasty in China. It has a really long history, of more than 740 years history. Furthermore, it is 8 meters wide and the total length is 787 meters. Nanluoguxiang was the down town of Yuan dynasty and is also one of the oldest neighborhoods in Beijing and there is still people living in this area.

f you ask, “what do you enjoy the most in Nanluoguxiang?” You would receive thousands of different answers from various people. There are increasing stores, featured shops with developed catering industry. Many visitors regard it as a snack street.

Beijing Sugar man. Craft men make sugar into different figures such as animals, flowers and other shapes. This traditional technique has a history of more than 700 years, since Song dynasty. 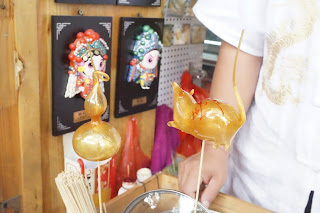 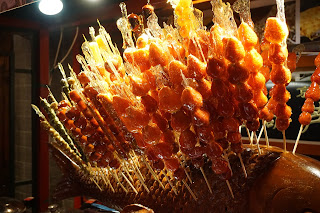 The greatest charm is some sudden discoveries and unexpected surprise that are often hidden in the noisy street, at the street corner in Nanluoguxiang. Now follow me patiently to seek and find them out.

There are lots of former residences of Chinese celebrities around Nanluoguxiang, but most of them are not open to the public yet. Recently, the former residence of Qi baishi and Mao dun are open to pubic. For several times I walked into some unprepossessing courtyards in some residential areas, I would like to use “mysterious, deep and amazing” to describe those housing. The owners are always hospitable and willing to share the history of his yard that we couldn’t find it in books.

The century-old school, the Heizhima Hu tong primary school is located in this alley. There is a huge stone that left out in the Wen Chang temple, a benchmark stone tablet from the Republican period, the most exquisite architecture, and various stone piers. Alley in alley, this is Nanluoguxiang, with abundant treasures and many historic relics which have become national protected heritage objects with its unique historical value.

Walking into the alley is like stepping into the maze, while every small thing could have their unusual stories, telling people the historical development and the social changes over years.
Recommendations 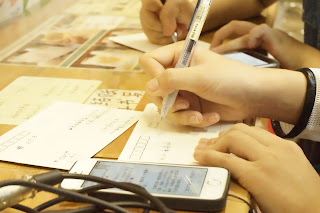 一城一朵You can write postcards here and send it to your friends, families in other cites or just save it on your own. The postcards selling in the store shows downtown scenery like simply Chinese elements. Making memories in China! That would be incredible! 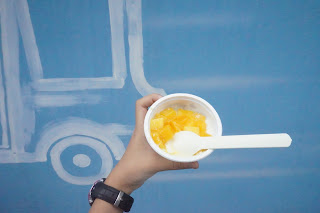 文宇奶酪店This store sells “double-skinned milk”, which isa typical top-grade of sweet food in southern China. There are always a lot of people lining up to buy it. However, I rarely try it before. 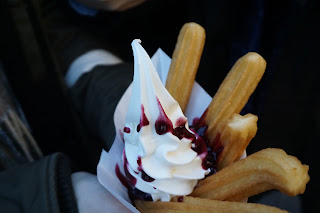 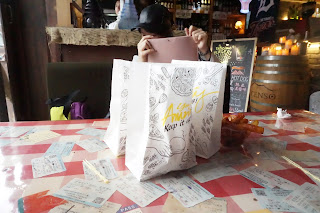 面包店 It advertise itself that they have the “Best bread in Beijing”. I don’t really believe at first, but when I tried it, I was attracted and I eat whenever I go there. There are also drinks and they are all pretty cheap, you can leave a note there on the wall. Fully recommend!

Plastered 8 ——A special interview with a ‘British Beiingner’

There is a little clothes shop in NanLuoGuXiang which named Plastered8. Nowadays, there are too many western elements pour into NanLuoGuXiang, as a result, the status of "National 3A scenic" has been cancel. Many shops in NanLuo have been removed during reorganize and renovate. But this shop still sitting there, changing its own themes.

There aren't any assistance soliciting in front of Plastered8, but there are also lots of customers from China or other countries attracted by this shop. Plastered8 sometimes redecorate and renew their new creates, but whether what decorate they did, their showcase is always colorful.

The T-shirts of Plastered8 are simple. This is because its founder, Mr. Dominic, likes simple and comfortable clothes, and the reason of why they are very popular in NanLuoGuXiang is there are many kinds of slangs and interesting patterns of Old Beijing Elements on them. In this shop, there are also some modern Beijing elements in this shop. For example, you may find an interesting thing in this shop called "Beijing Air". Beijing air becomes a hot topic these years, many people are curious about it; therefore, this can be of Beijing air, satisfy their curiosity, and enhance people's environmental awareness. We can say that you cannot find another shop which can mix Old Beijing Elements and modern Beijing elements together as well as Plastered8.

As for the founder of Plastered8, Mr. Dominic, he was a British noble before, but because of his dream of travel around world, and he doesn't like school, so he left England when he was 17. He has been to Africa, South America, and India. In 1993, he came to China as the status of a backpacker, and settled down because he had no money to go home. He said, "I had never known I would stay in Beijing for 20 years. I didn't have any plans that time. I just want to play well and be freedom."
Mr. Dominic said, "There weren't many ' ' that time in Beijing, foreigners have a lot of benefits, have a lot of chances. Many people invited me to teach English. It was very easy to find a work that time. There weren't many foreigners in Beijing, and there were just two bars. You can go to these bars to meet some leaders, and ask them for a job. If they think it's good, so you can teach their assistants English, and get two to three hundreds for salary." 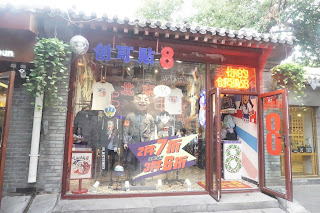 In 2003, Mr. Dominic moved in NanLuoGuXiang. The life in Beijing hutong aroused his create inspiration. Later, he began to sold his own design brand T-shirt "Plastered8". He put his love of Beijing hutong life into his distinctive T-shirt designs, use his eyes of foreigner to excavated the design of China style. Today, we can see stars with his T-shirt all over the world. Until 2009, Plastered8 T-shirt has already had three shops in Beijing, six shops in China. They are also some online stores selling their T-shirts. Plastered8 T-shirts also sell in the international markets like America, England, France and Singapore. Mr. Dominic also award the praise of " Entrepreneur of the Year" in "2008 British Business Awards".
Website: http://www.plasteredtshirts.com/ Mobile Number: +86 10 6407 8425
Business Hours: 09:30–23:00

Shichahai is a famous scenic area. It includes three lakes, Front Sea, Back Sea and West Sea. The name Shichahai means “Sea with Ten Temples” in Chinese. It got this name because here were actually ten temples around the lake. Shichahai has been a famous place for leisure and spend summer time since Qing dynasty. It is nice to go around the sea and travel through some famous spots with stories behind them. Shichahai is surrounded with places of historic interest and scenic beauty.

On the other hand, it is a place with old-style local residences. You can see a lot of local people around Houhai park and seek their daily life style. In the evening, there are old man fishing near the lake, holding colorful flash lights to help them look for fish. Old ladies at grannies age always gathers and dance around with music near the lake, and people who kick shuttlecock, a traditional Chinese national sport in which players aim to keep a heavily weighted shuttlecock in the air by using their bodies, apart from the hands.

However, you can also see a lot of art and architecture spots, such as Prince Gong’s mansion, one of the most famous tourist attractions to see royal architecture in Beijing. Many architectures around Shichahai played important roles in Beijing’s urban construction history as well as political and cultural history. 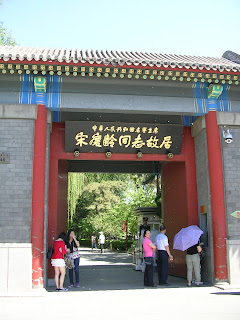 One main representative is the Former Residence of Song Ching Ling, who was considered the mother of The young Chinese republic.

Recently, as tourists get more, some handicrafts shops, snack streets and bars appeared, which made Shichahai a place where gathers both traditional Beijing culture and new culture in Beijing. 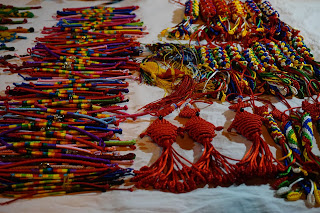 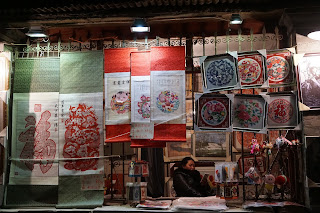 🅣I🅟: You can have dinner at local Beijing style restaurant around the lake, or enjoy Old
Beijing snacks at the snack street.
Suggested food:
爆肚Baodu（sliced lamb or beef stomach or tripe）
褡裢火烧Meat-filled steamed dumplings
绿豆糕The mung bean jelly cakes (stir-fried with other goodies in soy and chili sauce)
奶酪 A light and delicate milk-based yogurt appeared since imperial times. All you taste is the pure essence of milk, with just a hint of the
sweetness.
Those Beijing snacks are tasty and usually not expensive. Also, they are fast and convenient to eat, which enables you to eat as well as wondering around to enjoy beautiful sceneries.

Also, if you would like to enjoy a formal meal, you can have dinner at Quanjude Roast Duck, one of
the most famous original Roast duck restaurant in Beijing. It has good reputation in both the taste and
the service. 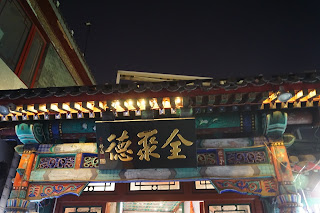 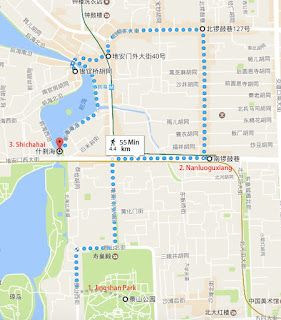